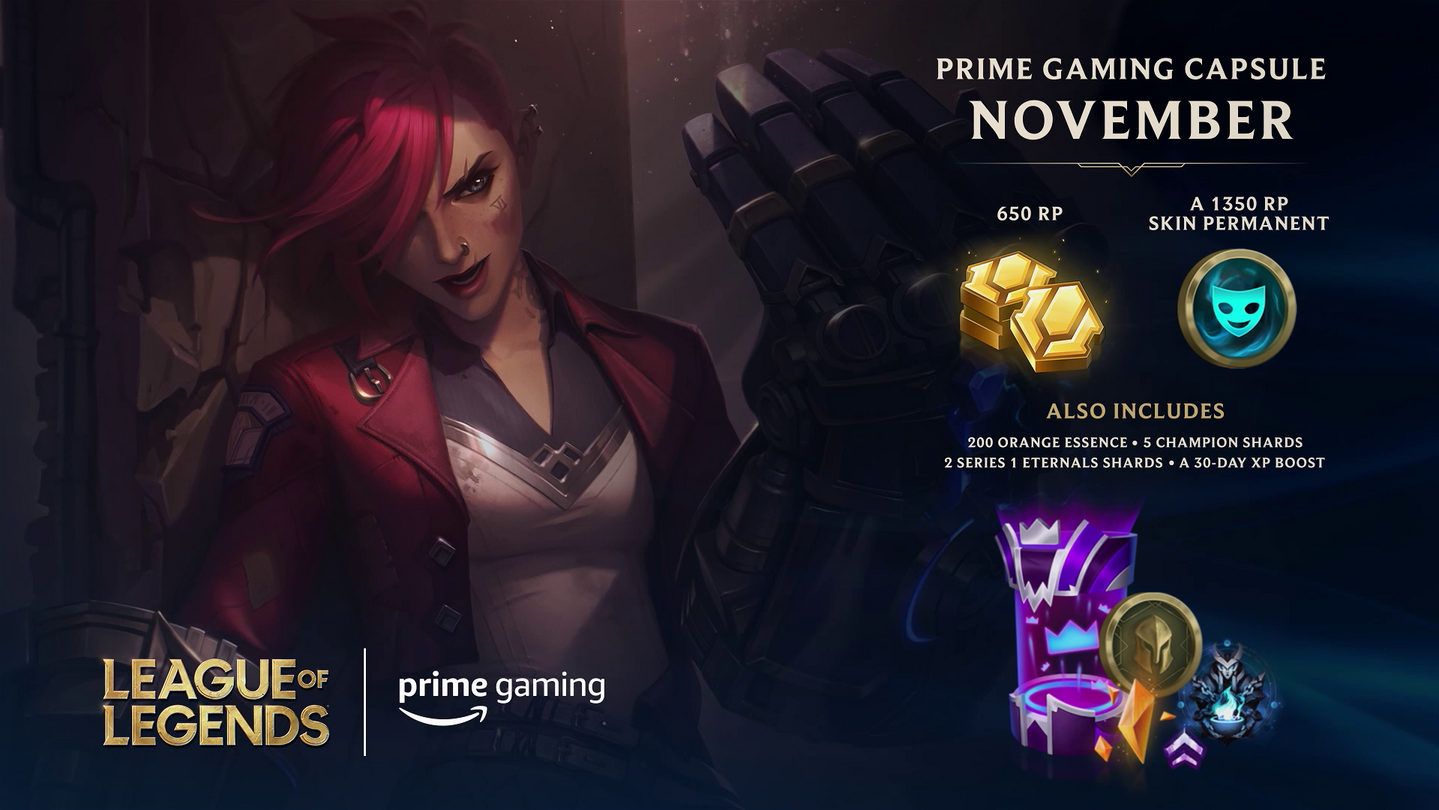 SEATTLE—October 27, 2021—Amazon Prime Gaming and video game developer and publisher Riot Games are teaming up on a long-term deal to make Riot’s games better for Amazon Prime members through exclusive in-game content for Riot’s biggest titles, including League of Legends, Legends of Runeterra, VALORANT, and League of Legends: Wild Rift. Prime Gaming will also be a global sponsor across Riot’s Esports titles, including League of Legends Esports, VALORANT Esports, and Wild Rift Esports, providing free content during various events. Additionally, in November, Prime Gaming has a few surprises for members to celebrate with the release of Riot’s television show Arcane. This landmark collaboration, which runs through 2022, raises the bar on content quality and value, setting a new standard for what’s available to Prime Gaming customers.

Prime members will have an opportunity to claim the following exciting new offers:

“Riot Games is an incredible partner that will help bring even more value to the Amazon Prime membership,” said Larry Plotnick, GM, Prime Gaming. “We’ve been working with Riot for a while now, but this collaboration raises the value bar for customers to ensure Riot’s games are even better with Amazon Prime. We’re looking forward to featuring additional content for Prime Gaming members in the coming months.”

“Since the beginning of our collaboration with Prime Gaming for League in 2018, we’ve teamed up to give away tens of millions of Skins, Skin Shards, and more. As we launched new games, Prime Gaming grew with us to deliver in-game content for players across our new titles,” said Sylvia Ko, Corporate Business Development Lead for Riot Games. “Now, in Prime Gaming we have a partner that shares our focus in making it better to be a player, not only through games, but also through broader entertainment experiences players would want to engage in, including Arcane and our esports.”

As part of the year-long collaboration, Prime Gaming will be a global sponsor for Riot Games’ Esports, across League of Legends Esports, VALORANT Esports, and Wild Rift Esports competitions, as well as sponsor multiple LoL Esports events for the LCS and LEC, and VALORANT Champions Tour competitions in North America and EMEA regions in 2022. Prime members can claim the exclusive Esports emote known as the “Happiness Overload” during this year’s League of Legends World Championships, along with three additional exclusive emotes in 2022. Opportunities to collect the exclusive emote will be promoted to viewers through in-broadcast placement during LoL Esports broadcasts and on LoLEsports.com.

“Our fans are extremely passionate about their esports, and we’re constantly looking for opportunities to improve our broadcasts and reward their fandom,” said John Needham, Riot Games Global Head of Esports. “I’m excited to extend our longstanding partnership with Prime Gaming and enhance the viewing experience for Worlds 2021, and upcoming VALORANT Esports and Wild Rift Esports events.”

Prime Gaming will have a presence across multiple global events on the 2022 VALORANT Champions Tour, serving as the presenting sponsor of the Agent Select component and “Flawless” moment, as well as integration across 2022 Wild Rift esports global events.

With Prime Gaming, Amazon Prime members enjoy tons of free, exclusive content for their favorite PC, console, and mobile games. Plus, they can claim a collection of PC games for free every month that are theirs to keep forever, and a monthly Twitch channel subscription. Prime Gaming’s selection of in-game content and free PC games is always growing and rotating to stay fresh, with new items and free games added every month.

This is in addition to the many other benefits available with Prime, including the best of shopping and entertainment from Amazon, including fast, free delivery, along with exclusive savings, early access to deals, Prime Day, and so much more. Members enjoy unlimited streaming access to a vast collection of TV shows, movies, sports and more with Prime Video, ad-free listening of 2 million songs plus thousands of stations and playlists with Amazon Music, unlimited access to a free rotating selection of more than 1,000 books and magazines with Prime Reading, and free unlimited photo storage with Amazon Photos.

Riot Games was founded in 2006 to develop, publish, and support the most player-focused games in the world. In 2009, Riot released its debut title, League of Legends, to worldwide acclaim. League has gone on to be the most-played PC game in the world and a key driver of the explosive growth of esports. As League enters its second decade, Riot continues to evolve the game while delivering new experiences to players with Teamfight Tactics, Legends of Runeterra, VALORANT, League of Legends: Wild Rift, and multiple work-in-progress titles. Riot is also expanding the world of Runeterra through multimedia projects across music, comic books, board games, and the upcoming animated series Arcane.

Founded by Brandon Beck and Marc Merrill, and led by CEO Nicolo Laurent, Riot is headquartered in Los Angeles, California, and has 3,000+ Rioters in 20+ offices worldwide.