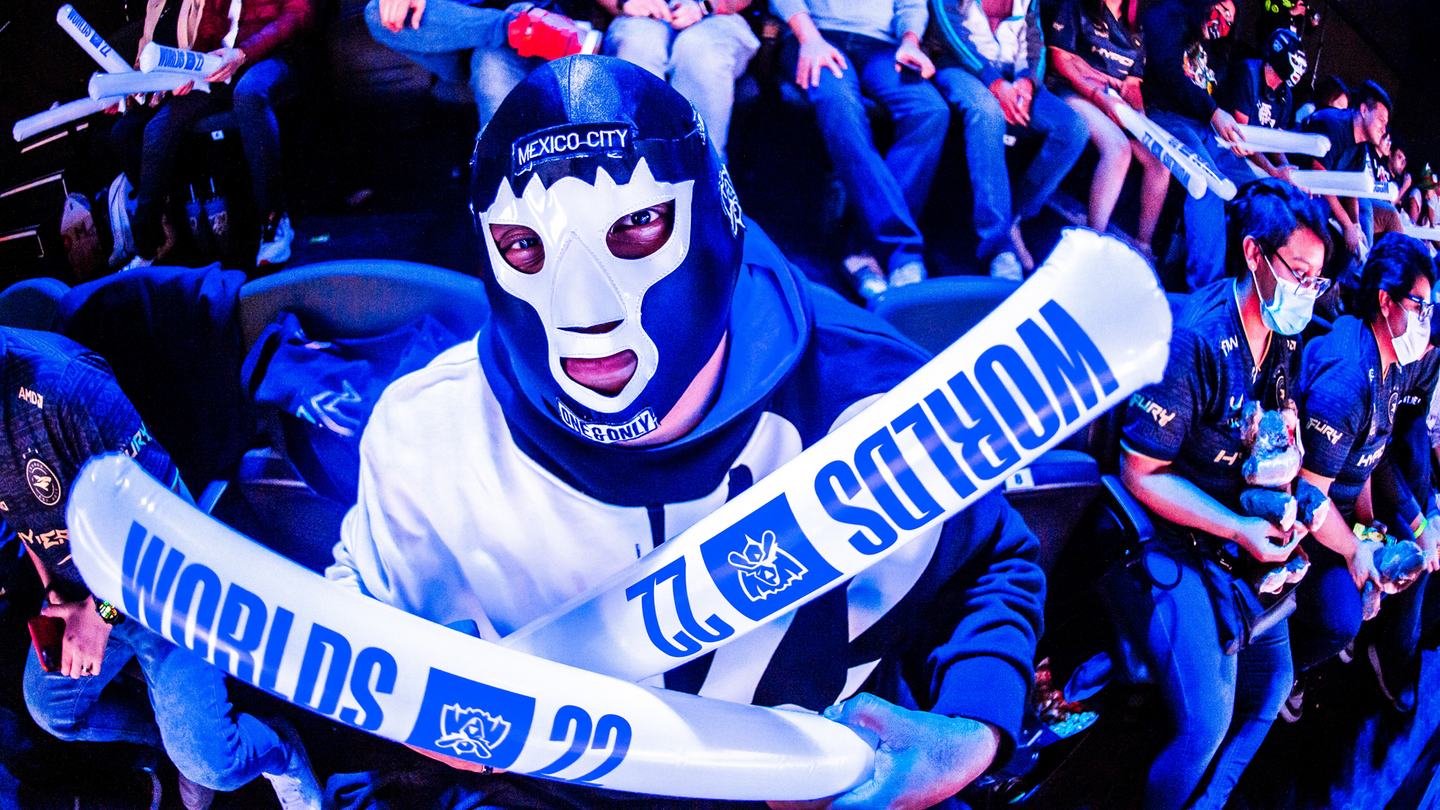 Walking the streets of Mexico City, you will see rows of vendors with stalls full of colorful masks. They’re the masks of Luchadores, Mexican wrestlers who perform acrobatic stunts with a flare for the dramatic. The sport is Lucha Libre or simply Lucha for short and it’s become a staple of Latin American culture.

So with Worlds coming to Latin America for the first time, Rioters in our Mexico City office had to answer the question: How do we welcome the world to Mexico with our own unique style?

Lucha was the answer.

“We wanted to do something that was representative of Mexico City, something that was iconic and had the local flavor,” said Santiago Duran, the Senior Marketing Manager for Riot Games Latin America. “But we also wanted something that wasn’t a cliche either. We went around a lot of ideas and eventually, someone on the team said ‘why don’t we do mascaras de Lucha, wrestling masks?’”

So the team had a few different masks made. They went to a family who has been making masks for wrestlers across Mexico for generations to create high-quality Worlds-themed masks. 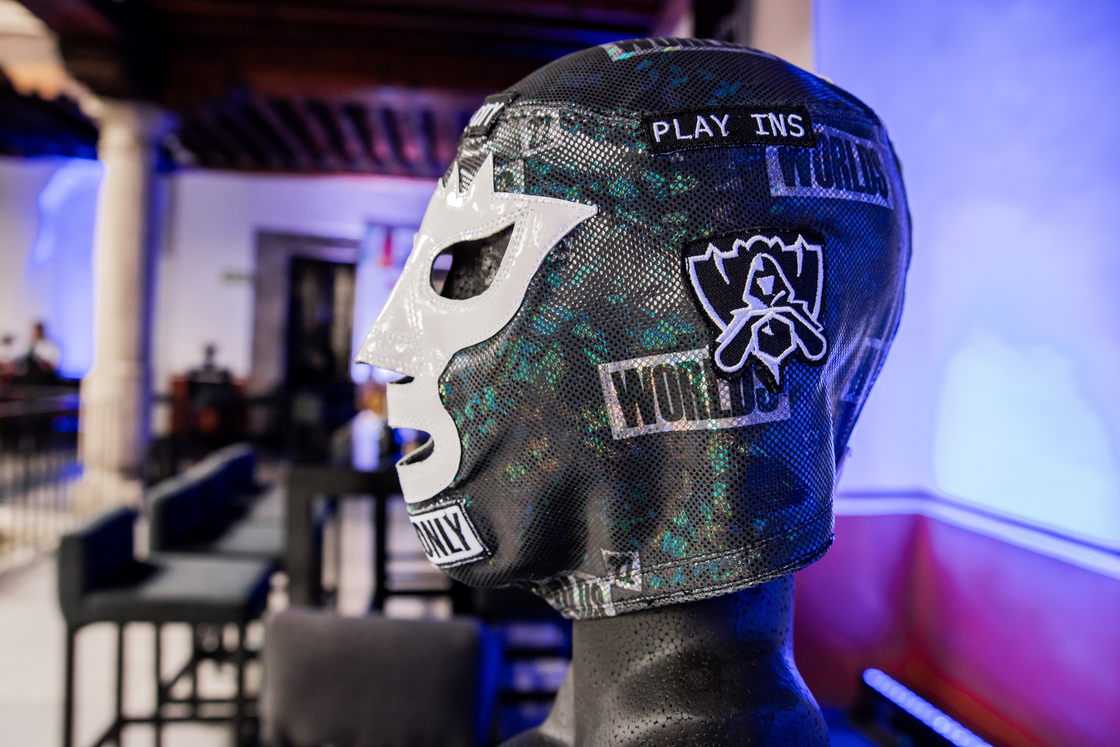 “We ended up doing four versions of the mask, made by local artisans,” Santiago said. “They’re handmade, super tough, and really high quality. They are real wrestling masks, ready for the ring. And there are also elements of the gala mask, a mask made for glamorous events. Then we also did a simpler version of the mask so every single person who comes to Worlds will leave with their own mask.”

With exquisite detail, the masks shine under the light as they welcome all attendees to the arena in Artz Pedregal in Mexico City. Once the doors open, the line forms as every fan picks up their mask, many of whom continue to wear it throughout the day’s action.

The masks are adorned with slogans representing the city and the event. Mexico City sits front and center above the eyes, CDMX, shorthand for Ciudad de México, on the right, play-ins on the left, and finally, the World’s slogan for 2022 “The One and Only” under the mouth.

“We joked that the name of the Worlds Luchadore would be ‘El One and Only,’ laughed Mariano Vives, the Creative Director for Riot Games LATAM. “Lucha is unique to our city and being a masked gladiator in that arena, it’s important.” 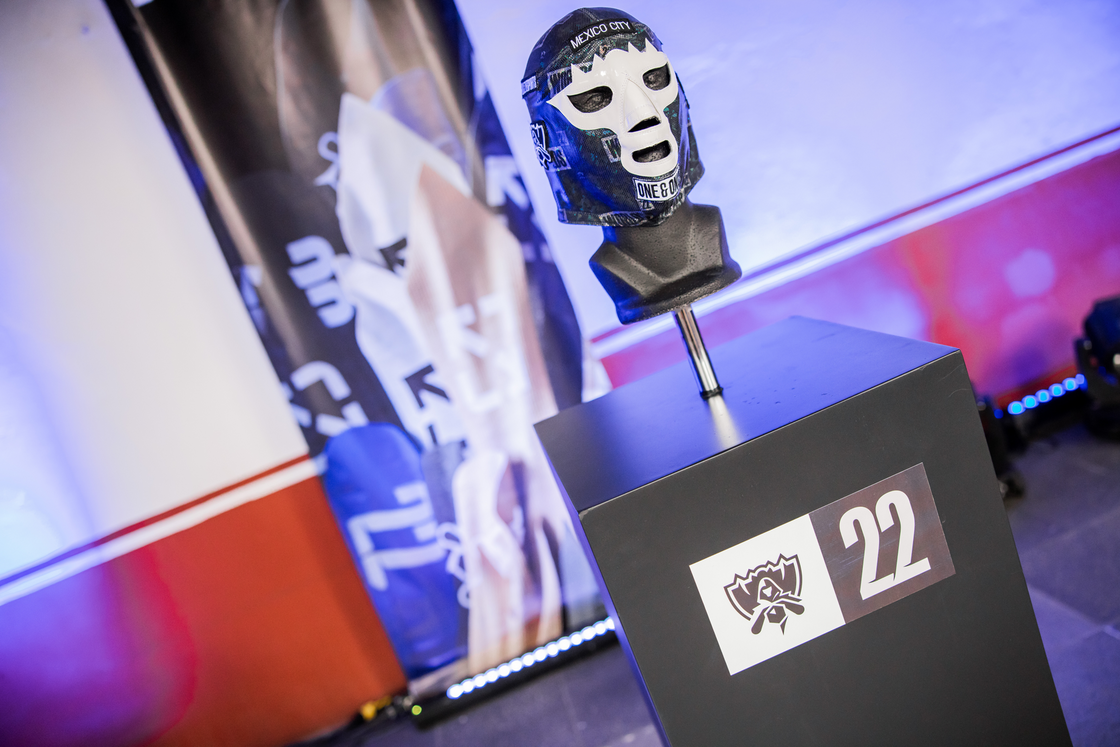 On the surface, there might not be a lot of commonalities between high-flying actors jumping through the ropes to send opponents flying towards the wall and the action on the rift. But when you dive deeper, the similarities emerge, and not just because Lee Sin’s powerful kick seems like it would be right at home.

“There are no ties in Mexican wrestling,” Santiago explained. “Just like in League, there always has to be a winner. So ‘The One and Only’ really matches perfectly with Lucha because it’s a representation of a confrontation, of a fight, and, in the end, there has to be one winner.”

And that’s not the only piece of resemblance. Like Worlds, some of the biggest Lucha matches feature international storylines as wrestlers from the US, Japan, and other Latin American countries take the stage to face off against Mexican wrestlers.

In League, there are storylines off the rift and on it as every match tells a story and follows a narrative. From First Blood, to when Dragons appear, to a dance around the Baron, to the crucial team fight.

“There’s a story in Lucha,” Mariano said. “I’m getting my ass kicked and then I’m kicking ass. It’s like a dance, it’s so theatrical and it has a narrative. And it all builds up to that exciting moment when you see the wrestler fly and you want to fly with them.”

Even the format of Lucha is similar to how fans are experiencing League of Legends during the play-in stage over in the arena in Artz Pedregal. A night of Lucha, similar to formats in other professional fighting leagues like boxing or the UFC, will also feature a series of different fights with five to ten matches happening in one evening. For the first few days of Worlds, eight matches happened every day as new teams took the stage with new storylines attached.

But the biggest similarity is the showmanship.

“When you see one of our live competitions like Worlds, we aim to put on a show,” Santiago said. “Sure it happens in other sports too but the way we use screens and lights, the flashy way of putting on a League of Legends match, it’s similar in ways to the theatrics and entertainment that happens in wrestling.”

Now, there’s one big difference. As much as players, and Rioters, like to joke about the script for Worlds, no one actually knows what team will lift the Summoner’s Cup at the Chase Center on November 5th. While plenty of improvising goes on between the Luchadores in the ring, there’s still a script for the season with a predetermined outcome. But that doesn’t make the experience any less enjoyable as millions of Lucha fans pack stadiums, watch on TV, and celebrate their favorite Luchadores every day.

The History of Lucha Libre in Mexico

The first recorded Mexican wrestler was Enrique Ugartechea in 1863 who developed the sport based off classic Greco-Roman wrestling during a French invasion of Mexico. The sport started to become popular in the 1900’s but really took off when Salvador Lutteroth founded the Empresa Mexicana de Lucha Libre (Mexican Wrestling Enterprise) in 1933.

Once television entered the ring, Lucha quickly ascended to the top rope. Soon after, Lucha had its first true superstar: El Santo (The Saint). Rodolfo Guzmán Huerta, born in Hidalgo, Mexico was always a wrestler at heart. In 1942, he debuted as El Santo winning an eight-man battle royale in Mexico City. With his iconic silver mask, El Santo quickly became the most popular wrestler in Mexico.

In the 1950’s El Santo took his silver mask to the silver screen. His first acting credit came in Cerebro Del Mar (Brain of Evil) and he eventually starred in over 50 movies which has made him arguably the single most famous entertainment figure in Latin American culture of the 20th century.

“El Santo is the quintessential image of Lucha Libre,” Mariano said. “Not just in the silver mask but in his body structure, in the way he moved. He was so famous he made movies and he even popularized the gala mask which is made of shiny, more premium materials. So we tried to replicate that with the Worlds mask because these masks represent elegance and Worlds is an elegant event and El Santo played a big part in bringing that elegance to Lucha.” 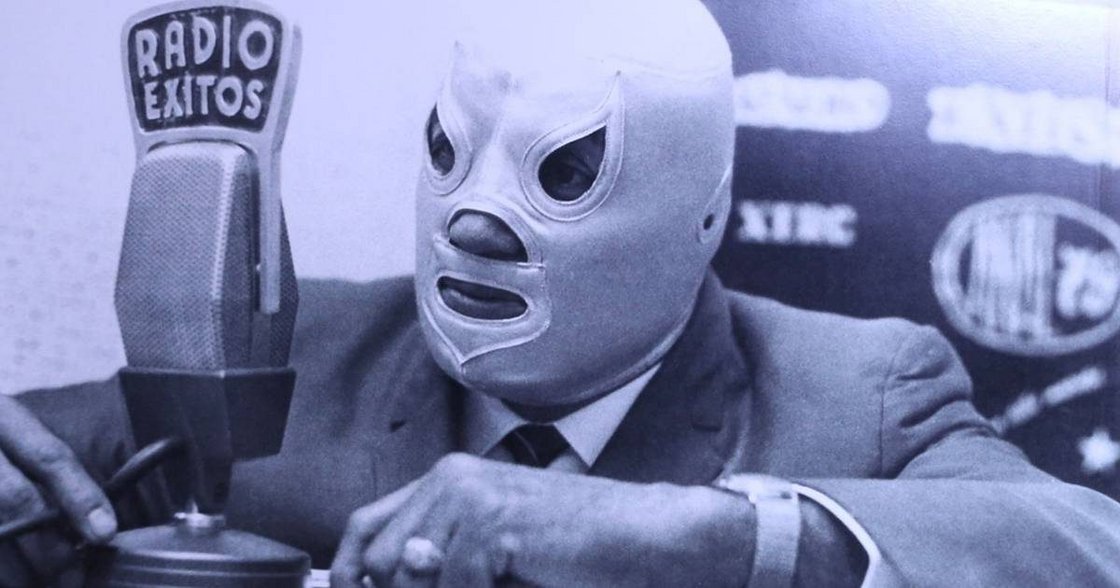 El Santo started a long legacy of the most popular Luchadores taking their acting talents, and rabid fan bases, to the movie industry. In the modern day, Luchadores are as popular as ever. Many come from wrestling families who see their lineage passed down in the ring. One such notable example is the Guerrero family.

Gory Guerrero kicked it off beginning his wrestling career alongside El Santo in Mexico City in the 1940’s. His four sons, Chavo, Eddie, Mando, and Hector, then continued the tradition in the ring. Now we are on to the third generation of Guerrero wrestlers as Eddie’s daughter Shaul and Chavo’s son Chavo Jr. both competed on professional circuits.

And that’s not even getting into the history of the masks themselves. While the history of wrestling primarily exists in the last century, the history of the Lucha Libre mask is said to date back to the days of the Mayans and Aztecs who would paint their faces before going into battle. Once wrestlers took to the ring, the colorful masks would imitate the bright paint of the native warriors.

And today, the masks continue to be at the core of Lucha Libre.

“The mask protects the identity of the Luchadore,” Mariano said. “To lose your mask in a Lucha is the worst disgrace that can happen to a masked Luchadore. They actually have fights where they bet on losing their mask instead of a championship, and that’s considered higher stakes.”

From Mexico Throughout Latin America, and the World

Over the years, Lucha has grown and grown. In the US, the WWE features plenty of moves made popular by Lucha Libre pioneers. And across Latin America, Lucha is still a common sight.

“I’m from Colombia and Lucha is incredibly popular there as well,” Santiago said. “You see it everywhere, in the big cities, and in the small towns. They will hold a fair and six wrestlers will be there putting on a show. It’s not quite as popular in Colombia as it is here in Mexico where there will be a big show every weekend. But it’s certainly still popular. And so is Mexican cinema so we knew about El Santo, we knew about Blue Demon, another famous wrestler because we watched their movies.”

For League of Legends as well, Mexico is at the center of the Liga Latinoamérica but the players in the league, and the fans who watch, come from every corner of Latin America.

“League of Legends has a super passionate fan base in Latin America,” Santiago said. “We make the extra effort for players by localizing the game in proper Spanish, having real voice actors, and just making sure it’s tailored for the Latin American player. That’s what differentiates us from other studios.

“But we’ve never held Worlds,” he continued. “That was for the US, for Asia, for Europe. So this, and speaking for us as Rioters and for the community, it feels so special. It feels like a dream come true. And the fans are responding with so much energy, with so much passion. Bringing Worlds here represents more than you’d think for the fan base in Latin America.”

Whether it’s in the stands of Lucha Libre or in the seats of Artz Pedregal, you can count on fans here in Mexico City, and across Latin America, to absolutely bring 110% of their energy, enthusiasm, and love for the sport.

While Worlds is headed to New York for the group stage, there’s no question that the team in Mexico City, and fans in Latin America, enjoyed World's first trip to the region. If there’s anything to take away, it’s this: They want more. More esports. More competition. And more opportunities to show their passion for League of Legends.

Be sure to follow the action throughout Worlds on lolesports.com to find the latest schedule, live broadcasts, and up-to-date standings as the best League of Legends teams in the world travel from Mexico City, to New York, to Atlanta, and finally to San Francisco where one team will earn the title of the “One and Only.”